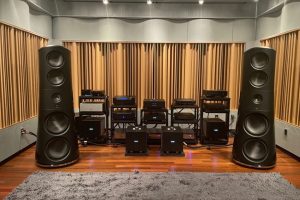 We are thrilled that our friends and partners at Magico have received these accolades from the esteemed audiophile publication The Absolute Sound.  Editor in Chief Robert Harley says the Magico M9 “is the best-sounding loudspeaker I’ve heard.”
“There’s one more aspect of the M9 to report; the speaker has a complete and unwavering sense of effortless ease on all music. It can scale the heights of the most demanding music without a hint of congestion or confusion. It’s just a natural, organic, immensely involving sound on any type of music and at any listening level.

Overall, I have to say that the Magico M9 is the best-sounding loudspeaker I’ve heard. It represents the ultimate realization of the accumulated knowledge and sophisticated technologies Magico has developed over the past 25 years, along with some remarkable innovations that push the M9’s performance to an unprecedented level.” –Robert Harley, Editor, The Absolute Sound

We are pleased to feature Magico here at Audio-Ultra.